This is a tale of two brothers. One was born with enough talent to be drafted by the Chicago White Sox out of high school; the other was born with a 50 percent chance of living through the night. One would go on to represent his country in the sport he loved, the other would go on to endure nine surgeries and a body so racked with pain that it felt more like an adversary.

It is also a tale of how the sport of bowling brought that less-fortunate brother more fortune than most people find in a lifetime, of dreams so tireless that even the bleakest circumstance is powerless to deny them. 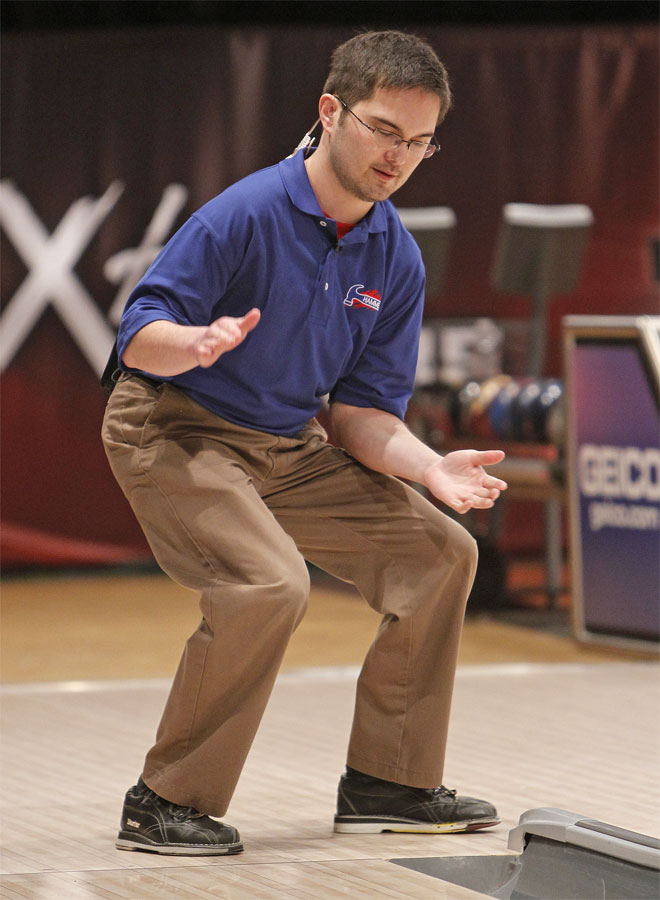 “Kevin is a go-getter,” Clarita Reuer explains of her son, the amateur who took his best shot at the pros on ESPN Sunday afternoon. “He has always wanted to be somebody, because he was always competing against his younger brother, Paul, who was always very athletic. Kevin is about 15 months older and is also athletic himself, even though he has had so many handicaps throughout his life.”

Competition between brothers is nothing new, but for brothers as ambitious and as different from one another as Paul and Kevin Reuer, that competition was no typical sibling rivalry.

Paul was the big-time athlete already drafted by a Major League Baseball team before he joined the Memphis University Tigers, the typical jock with the good looks who steps up in the clutch and knocks in the game-winning run in the bottom of the ninth.

Kevin was the frail kid who, as a child, spent more time in hospitals than most people spend in their lifetime, the brother whose surgery-ravaged body thrust him into the shadow of the other’s accomplishments.

But somewhere in that shadow Kevin found his competitive fire. He embraced the challenge to live as active a childhood as his athletic brother amid circumstances that could just as easily have sentenced him to a bed-ridden adolescence.

“Kevin was a TEF child. That means tracheoesophageal fistula,” Kevin’s mother explains of the brutal challenges he faced in childhood. “When he was born, he did not have an esophagus. So they made an esophagus for him when he was a month-and-a-half old. His last big surgery was when he was 14. They put a titanium steel rod in his back to fuse his spine because he had developed severe scoliosis from having so many surgeries as a child.”

But if the steel rod that surgeons planted in his back when he was a freshman in high school was one of many circumstances that distinguished him from his more fortunate peers, Kevin certainly never saw it that way.

“The thing that my parents taught Kevin and I is that we are equal,” Paul Reuer says. “So even though Kevin had all his ailments, he never let that hinder him. He played basketball, he played soccer, he did a lot of things.

“We always competed with each other,” Paul Reuer adds. “I learned to hit lefty pitching because Kevin pitched to me, and he was able to build his confidence bowling by beating me on the lanes.”

Those were the long-ago summer days that Paul and Kevin spent riding their bikes to the schoolyard at Hoover Elementary in Schaumburg, Ill., where they “played fast pitch against the wall ‘til the lights went down” and games of pickup basketball knew no end.

“I remember my mom and dad getting us a basketball net, and we played one-on-one, and there were games when we played by ones and twos up to about 125, and then mom and dad were like ‘Are you guys ever going to come inside?’ and we’d say ‘No! We gotta win by two!’ Kevin wasn’t going to be caged in by what the doctors said.”

Before Kevin Reuer threw a shot at the International Training and Research Center in Arlington, Texas, last week, where he would be the only one of the six amateur finalists in the PBAX Showdown qualifier to finish plus, he had already won the greatest battle of his life — the battle to defy those doctors his brother Paul refers to. 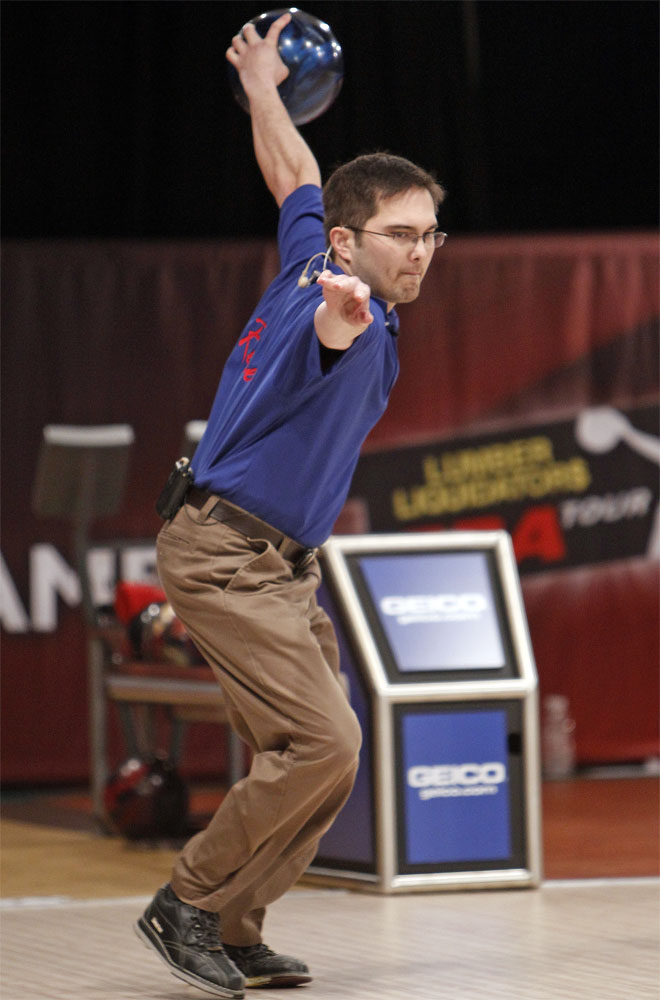 They are the doctors who said that his final surgery would halt his growth (Kevin grew another two inches); that he had so little chance of surviving the surgery he needed as a month-and-a-half-old baby that his mother actually signed his death certificate (Kevin is now thirty-one years old); that the steel rod in his back would prohibit him from bowling (Kevin qualified to compete against five of the top bowlers in the world on ESPN yesterday afternoon).

“He should not really be bowling,” Clarita concedes. “I don’t want him to bowl, because the surgeon told him that it is bad for his back. But bowling is the only sport that Kevin can compete in because of the steel rod in his back. He cannot overdo it, though, because of the weight of the bowling ball.”

Kevin Reuer apparently hasn’t received that particular memo. He regularly bowls in several leagues each week and substitutes in others.

“He has gotten used to the pain in his back,” his mother explains. “He has always been in pain, but he has also developed a very high tolerance for pain. You cannot do it; he does.”

For Clarita Reuer, Kevin’s improbable story is just that simple. It is the result of a will to do it, a defiance that kept his dreams within reach even as doctors doubted that he would live to see the morning.

Maybe those are the words that Kevin heard when, in the opening game of a six-game competition against five other amateur finalists in which the highest finisher would bowl on ESPN the following day, he opened with a disappointing 176 and found himself 54 pins behind leader Brent Watson’s 230. To make matters worse, each of those next five games would be bowled on a different lane pattern.

But that’s how it is when you’re Kevin Reuer. You fall down, you find yourself in binds that seem inescapable, and then you find your way back up again. Two games later, Kevin Reuer sat atop the leader board after a 262 in game three, averaging 210 for those five games he had to make up the ground he lost so early on.

The next day, he sat alongside Rhino Page, Norm Duke, Jack Jurek, Mike Devaney and Bill O’Neill — and this was no pro-am or charity function. It was, as 2010 U.S. Open Champion Bill O’Neill’s nickname puts it, “the real deal.”

By the time Kevin Reuer stood under the hot lights of ESPN cameras and waited to make the first televised shot of his life, no one needed to tell him just how real this deal was.

“I thought I knew what pressure shots were during the qualifier, but this brings it to whole new level,” Reuer said of the experience. “Trying to execute when your heart is pumping like this and you know everyone is just waiting for you to throw the ball, it’s real hard to execute good shots.”

To viewers who watched as Kevin Reuer took his best shot at the pros on TV, his appearance on that telecast was the culmination of months of fan voting and six grueling games of qualifying. But to Kevin and his family, it was the moment when this tale of two brothers finally found some closure.

“I said to my son, Paul, ‘This is the biggest thing that your brother has ever had. For you, you don’t know how it is, because you were drafted by the Chicago White Sox and it was a big deal, you were a collegiate athlete, you have no problems with your body. And your brother has had all the negatives in life, so for him this is the biggest thing that could ever happen to him.”

“This was a dream come true for him,” Paul says of his brother’s feat. “I mean, it’s hard not to become emotional when you see everything that he has been through. He’s been bowling since he was about seven years old, and he always bowled really well. But to see him transcend all he’s been through and get to this point, it’s something that you just can’t put into words. It’s like he’s won the World Series.”

And who knows, maybe Kevin’s experience bowling on ESPN was only the start of bigger things to come.

“I think he’ll learn a lot from this,” PBAX Showdown champion Rhino Page said after defeating Bill O’Neill for the win. “And maybe it will give him some motivation to join us out here.”

Maybe. After all, if Kevin Reuer does show up on another PBA telecast in the years ahead, it would hardly be the first time he faced improbable odds and decided that he could beat them.