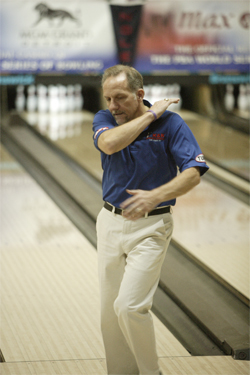 One thing you learn when you lose the one you love is that you have nothing left to lose.

That, above all, is the thing Ron Mohr had learned by the time he made his first shot of the 2011 PBA Senior Tour season.  He had no idea how things would turn out after half a year away from the lanes, or even if he really wanted to bowl at all. But he did know one thing: No loss in a bowling tournament could possibly rival the loss he had just endured.

And everyone in the building knew it the day a messenger lunged out of nowhere to slap out a 10 pin at Harvest Park Bowl in Brentwood, Calif., giving him his third title in six events.

The angel is Mohr’s wife of 12 years, Linda Mohr, who passed away in January from complications following elective knee surgery.

“I actually had enough time on the approach to think about what an unbelievable year it had been, how I had escaped so many times, been through so many close matches, gotten so many breaks,  that I guess I had used up my nine lives,” Mohr recalls of that moment.

And then the 10 pin fell, and the year he describes as an “incredible script” completed another riveting scene. Mohr spun around and shouted “Yes!” as he pumped his fists. The Xtra Frame crew roared with shouts of “Oh my God!” And PBA Tournament Director Corey Kistner summed it up with the succinctness of one who knows how often words fail us.

“That may have been the most incredible finish in a Senior Tour event during my career,” he said.

But Mohr, a three-time member of Team USA, got the feeling he had an angel on his side long before then. It took him all of one game to figure it out.

“It was the very first game of the first tournament of the season. I bowled a 185,” Mohr remembers. “Normally my body temperature would be about 115 after a game like that. I would be fuming inside because I am already under and behind the leader. But for some reason an amazing sense of calm came over me. It was like ’You will be OK. It will work out. You will be alright.’ I have to credit Linda for that. It turned out to be a pretty good block, and I finished fourth.”

To the dear friend whom Mohr credits as his biggest help in the weeks following his wife’s death—a time during which he says he was “just a zombie”—that is the most noticeable change in Mohr’s character.

“He knows now that it’s not the end of the world if you have a bad game or lose a match,” says Jackie Graeber. “I think that’s what helped him out so much this year, because there’s no pressure.”

And by the time his angel slapped out that 10 pin against Hugh Miller at the PBA Senior Northern California Classic eight weeks later, his finishes in the first six tournaments of the year were as follows: fourth, third, first, second, first and first.

One of those firsts came at the Senior U.S. Open, the first tournament he bowled after finally having the chance to bury Linda on June 1 because, as Mohr puts it, “you don’t bury people in Alaska in the winter time.”

When Mohr returned to the lanes just days after the burial to seize that Senior U.S. Open title, his angel got back to work just as quickly, slapping out those stubborn 10s when he needed them most, carrying him through one tight 10th frame after another. 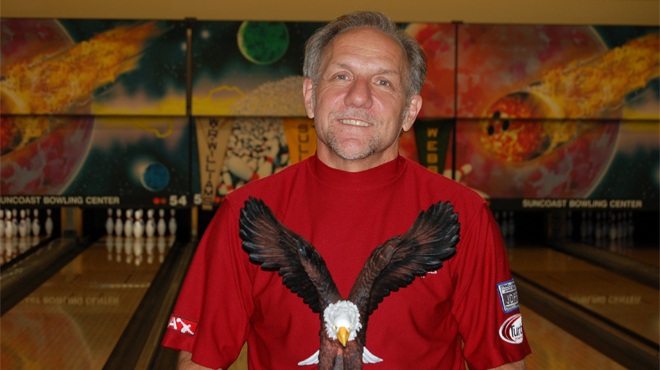 “I still talk to her every day,” Mohr says. “In that title match against Hugh Miller I was standing on the approach talking to her, just thanking her for helping me have such a great first half of the year.”

The places where he would talk to her were the same centers where he had been with her during his conspicuous debut on the PBA Senior Tour in 2009, when he won three titles and his first Player of the Year award.

That may seem like an act of tremendous courage to most people. But to Ron Mohr, it did not take much courage at all.

“I don’t see that as ‘courageous’ on my part, because I think that we were both there, working through this together,” Mohr explains. “And I feel that it was something she would have wanted me to do.”

From the time of Linda’s surgery in the summer of 2010 to the time she passed away in January of this year, Ron Mohr had bowled a grand total of about 12 games. By the time the 2011 PBA Senior Tour season neared its end with its second-to-last tournament at Airport Lanes in Jackson, Mich., he was collecting his fourth trophy in nine events and clinching his second Player of the Year award in three seasons.

“I don’t know how you could write a more incredible script,” Mohr says. “To beat two Hall of Famers in Wayne Webb and Walter Ray (Williams Jr.) for my first major at the Senior U.S. Open, and then to wrap up the Player of the Year in Jackson was just an amazing thing. It was the completion, the finale, and I had my angel helping me out through the whole process.”

To Mohr’s brother Jim, his performance in the aftermath of adversity is beyond human understanding.

“To have that long of a break away from the lanes, and not even really know or care whether you bowl again, and then to go back and attack it and be even more successful than you were when you won Player of the Year, I just don’t know how he did it,” says Jim, who operates a gaming website for special needs children.

After wrapping up his first Player of the Year award in 2009, Mohr hesitated to think of himself as anything more than “just a pretty good bowler from Anchorage, Alaska.” And if you think he considers himself much more than that after the most dominating season in the history of the PBA Senior Tour, you don’t know Ron Mohr.

“After my wife and I went through the end of 2010 and early January, it really put life in perspective,” Mohr explains. “I realized that no matter what happens, even if I were to win the Player of the Year this year, I still have to go home and take out the trash, and feed the dogs, and mow the yard. I have already done the life-changing event thing; now the rest just falls into place.”

That is the Ron Mohr bowlers will face at this year’s PBA World Series of Bowling, an event which Mohr says he is “98% sure” he will enter. At 55 years old and without a single regular PBA Tour title to his name, the odds might seem to be stacked against him.

Time will tell what Ron Mohr’s angel has to say about that.