A shoeshine stand may be an unlikely place for a legend’s life to begin, but when you’re a working-class kid prowling the streets of Akron, Ohio, for some way to turn a buck in the 1940s, there aren’t a lot of options.

That’s how it was for two-time USBC Masters champion, Dick Hoover. When he wasn’t getting his hands grimy with shoe polish and soiled rags, he was hauling 100-pound bags of cement over his shoulder for Stuver Bros. Co. in the heat of an Akron summer.

When Hoover left behind that shoeshine stand for work as a pin boy at a place called Main Recreation, he found bowling a lot more fun than kneeling over the scuffed shoes of strangers. In 1946, he bowled the highest series to be certified in the nation that year, an 847. Just 16 years old at the time, Hoover was the youngest ever to do so.

“Hoover’s friend and teammate, Gilbert Smith, foresaw the payoff in getting the potential champion in peak physical shape,” David N. Dennis wrote in a 1951 Bowling Magazine profile. “Two days before the All-Star, Dick and a fellow worker unloaded a whole carload of 100-pound bags of cement.”

Long before Rocky Balboa pounded slabs of beef in a meat locker on his way to doing the same to Apollo Creed, Dick Hoover threw around thousands of pounds of cement on his way into history. But even Hollywood could not have dreamed up this script.

“You’re going to see that boy hit the pocket so often you’ll have sore eyes,” Hoover’s buddy Smith said of him as the All-Star began that year. “Save your money for new glasses.”

There would be many sore eyes in the house just a few days later.

When Hoover showed up in Chicago to bowl the 1950 All-Star tournament—which became the U.S. Open in 1971—he was a 20-year-old kid who, by his own admission, had “not rolled many matches since I started bowling at the age of 16.” In fact, Hoover had known no greater thrill in his life at that point than the day he caught two bass on a nearby stream.

“In those days he was as absorbed with fishing as he is with bowling today,” Dennis reported.

Three days later he had celebrated his 21st birthday, become the youngest bowler ever to win the All-Star, and the first bowler to win it in his first try.

“He will never forget these important dates: Dec. 15 and 18,” went one Bowling Magazine story. “On one day he was a man. On the other he took unto himself the nation’s most coveted individual match championship.”

Thrilling as the story may have been to the press, it was hardly enough for Hoover to forget those days of getting by on the tips he made shining shoes and setting pins. He tipped the pin boys $100 on his way out the door after the win in Chicago, and the only thing on his mind was how he would make it back to Akron in time to report for work.

Hoover begged to hitch a ride back home with fellow Ohio native, “Buckeye Bomber” Steve Nagy, “because he wanted to get back to his job at Stuver Bros.”

“Nagy was forced to point out that Dick had a new career ahead of him and that his employer would understand the situation,” Dennis wrote.

This was the 1950s, a time when bowling was as good a reason as any to show up for work a day late. Nagy persuaded the new All-Star champ that holing up in Chicago for the night was a much better idea than hurrying home for another long day with those bags of cement.

That, above all, is the Dick Hoover his mother always knew.

“Dick didn’t seem as excited about that as he was the day he caught the bass when he was a little boy,” she said of the night her son came home after shooting that 847 series and didn’t think enough of it to tell his parents.

The Dick Hoover everybody else came to know was the one who made the Masters his own personal playground. He was “the fireballing strike artist from Akron” who in four consecutive years finished third, third, first, and first. Hoover always was a fan of firsts—the first to win the All-Star in his first try, the first to win the Masters back-to-back in 1956 and ‘57, the first to post several four-game series of 900 or greater there.

By the time the sun set on Hoover’s days as a Masters competitor, he had logged six finishes in the top five.

“Bowling today is too serious,” Hoover complained in 1974, long after he hung up his bowling shoes for the life of a proprietor. “Today, these kids feel like they must cash in every tournament. Heck, when we used to bowl, all we were sure of was having fun.”

By then, even Hoover had to look back and laugh at how all the fun got started. After all, the only reason he ever set foot on a bowling lane in the first place was that a shortage of pin boys at Main Recreation forced him off the shoeshine stand and into the pin pit. And all it took to turn him from a pin boy into a bowler was a doctor’s advice that he “take up something that would strengthen his arm” after he broke it playing ball in the street. 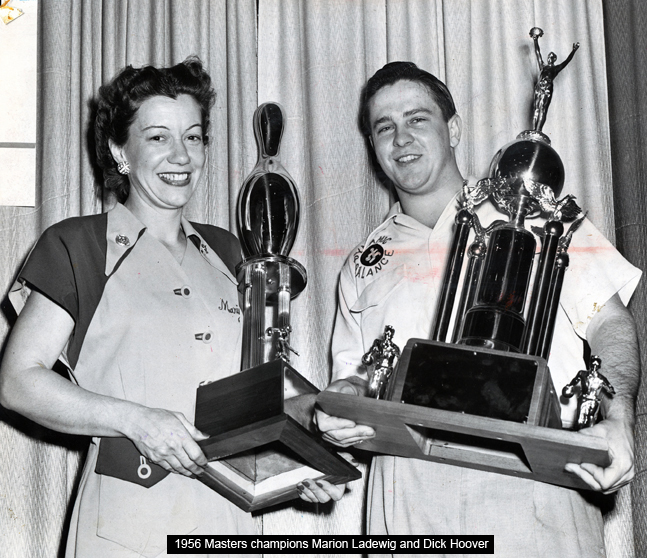 Most of all, Hoover had to laugh at the day the great Andy Varipapa heard about this teenage “fireballer” up in Akron, watched him toss a few shots, and grunted “too much speed, he will never be a good bowler.”

And maybe he paused now and then to remember the father who rode the bus to work just so Hoover could have the car to take his Brunswick Mineralite bowling team on the road. From Youngstown to Newton Falls, Sebring to Ashtabula, Hoover and his boys never once found a bowler in the state of Ohio who had an answer for them.

“They were undefeated,” Dennis wrote. “Dick was the star, averaging about 220. Perhaps he never before realized how well he could adapt his bowling to unfamiliar alleys.”

Or perhaps it wouldn’t have made much difference to him. Not to a guy who couldn’t hurry back to work fast enough after heading to Chicago as a boy and leaving as a man who stunned the bowling world.

Even Varipapa would have to admit it: The kid did alright for “too much speed.”