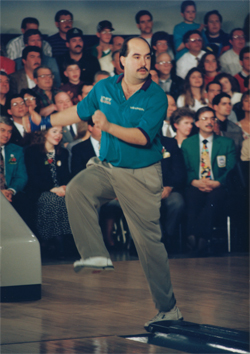 Any number of songs should play in the background of this story as you read it, but especially “Wrap it Up” by The Fabulous Thunderbirds, the track Del Ballard had in mind when he closed his eyes and bobbed his head to a beat no one else in the building heard as he stepped up to bowl the 1987 U.S. Open title match.

“I loved it, absolutely loved it,” says Ballard, who will be inducted into the USBC Hall of Fame July 1. “My favorite car of all time.”

And whenever that song came on the car stereo in the years that followed, it would always be the soundtrack of a memory, the rollicking pop-rock hooks that took him on an adrenaline ride to the first six-figure check ever issued to the winner of a PBA tournament.

A lot of songs would attach themselves to memories by the time Del Ballard’s days as a touring pro were done.

“This time the song was ‘Wanted Dead or Alive,’” Rory Gillespe reported in Bowling Magazine after Ballard seized the coveted Firestone Tournament of Champions title in 1989. “At the Masters it was ‘Gimme Some Lovin’’ by the Spencer Davis Group and at the World Open it was ‘Mony, Mony’ by Billy Idol.”

For a Texas kid who cut his teeth bowling high-stakes action matches in and around his native Dallas years before the greater glories that awaited him, songs with lines like “I’m a cowboy, on a steel horse I ride” must have felt like they were written just for him.

Those were days when names like Norm Duke, Del Ballard or David Ozio carried a celebrity that went no farther than the county line, but their talent already was big enough to occupy the country. And soon, it would.

They were days when a 16-year-old Norm Duke went scouring the bowling alleys of Dallas looking for that local hot shot called Del Ballard, and soon found himself embroiled in a 14-week-long match that ended with a dead-even tie and Norm Duke perching a chair on the approach to study the lane and try to understand why he hadn’t won them all.

“The only guy I know who hates to lose more than I do is Norm Duke,” Ballard says. “Back then, we’d bowl for $2,000 a game. Duke came to Dallas to bowl me where I bowled league, where I was the best, because he knew if he could beat me there he could make a lot of money. I had guys who put up the money for me, and he had his own action.

“At first he beat me six weeks in a row,” Ballard continues. “Every time I needed a strike I’d leave a ringing 10 here, a solid eight there. I just couldn’t beat the guy. Then one week I won, and he started leaving the ringing 10s and solid eights, and we ended up in a tie. Then the last week, he won, and we just quit.”

Few people outside those old Dallas haunts had heard the name Del Ballard before that day at the U.S. Open back in ‘87, so maybe you couldn’t blame them if they took it as a given that Peter Weber, Ballard’s opponent, would seize that historic prize as his legendary father looked on from the front row.

“I wasn’t intimidated by many people when I came on tour,” Ballard explains, “because I had already bowled against the Dukes and the Ozios. I had already proven to myself that I was good enough.”

“I have always thought he’s got one of the best games I’ve ever seen,” says two-time Tournament of Champions winner and PBA Hall of Famer, Mark Williams. “His concentration level and intensity was above anyone else’s. He was one of the few guys ready to make an immediate impact. A lot of guys took three or four years to become accustomed to the tour and the lane conditions. It was hard to make an impact right away.”

That was the Del Ballard who silenced every doubter in the house at that storied U.S. Open, where he packed seven strikes and fist pumped his way to a nearly 40-pin victory.

“We were watching on TV and we were feeling every shot,” says three-time PBA titlist Robert Lawrence, who would go on to room with Ballard on tour for four years. “Anytime Del was on it was just fun TV because of his body motions and all that. We knew what was going through his head. It was just so much fun to watch. The tougher the challenge, the more there was on the line, the greater he was.”

Fun to watch for most people, at least. By the time Pete Weber left a devastating pocket 10 pin in a must-strike seventh frame, his father winced and turned away as if he’d been slapped across the face.

“Del Ballard Jr. put the eyes of Texas on the young Missourian,” Bo Burton said after Ballard captured the first title of his career against a guy who already had nine to his name and would go on to win 35.

Ballard put the eyes of Texas on many men after that: Walter Ray Williams at the 1987 Brunswick World Open, the 1989 Tournament of Champions and the 1993 U.S. Open,  Keith Smith at the 1988 USBC Masters, Bob Benoit at the 1989 Showboat Invitational—the kind of events most players hope to win just once in their lives.

The one event where he always seemed to figure it out was the Masters where, in 1989, he came within a few games of becoming the first bowler to win it back-to-back since Billy Welu in 1965.

“I love the match play,” Ballard says. “I love getting on a pair of lanes and bowling somebody. To me match play is like bowling action. I like action.”

Anyone who prefers to remember Del Ballard for the ball he dumped in the gutter when he needed just seven pins to defeat Pete Weber for the 1991 Fair Lanes Open title cannot have been paying attention while the man claimed four majors on his way into both major bowling Halls of Fame. Or while he won another title just two weeks later.

“We were roommates at the time, so we had to drive to the next tour stop together, and it was just brutal,” Robert Lawrence remembers. “It was a very quiet ride. He just wanted it to go away. I said ‘Del, this is never going away. You’ve got to turn this into money! Turn it into a bumper sticker! Make some money out of this!’ There’s guys who are remembered for one thing, and unfortunately for Del, even with all those majors, it is still the gutter ball. But that’s the strength of Del Ballard, winning two weeks later. That was amazing.” 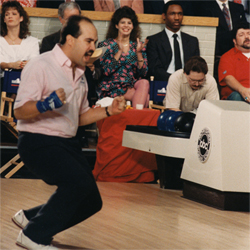 The TV lights that shined on him as the Fabulous Thunderbirds took center stage in his mind may have dimmed long ago, but Ballard still knows where the action is at.

“He is such an effective ball rep,” Lawrence says. “I just don’t think there is anyone better out there. He doesn’t just help players with their equipment; he helps them with their physical game, their mental game, their ball choices. He is the total package. You will find guys who are great ball drillers or great coaches or great at helping you with your mental game, but I don’t think there is anyone in the world who can combine all three factors into making you the best you can be.”

It may not be quite the adrenaline rush it was when he wore the bowling shoes and cruised the streets in that brand new Shelby, but it’s still the PBA Tour. And to the many players he has helped into the winner’s circle over the years, Del Ballard is still the man.

Any doubt Ballard had that those he has helped over the years would return the favor vanished after news broke last year that he had been diagnosed with cancer.

Just ask Randy Pedersen, who delivered what might have been the most emotional moment of this year’s PBA Hall of Fame induction ceremony when he fought through tears to express his concern for Ballard.

Or Jason Couch, who moved Ballard to tears when he dedicated the title he won at this year’s PBA Plastic Ball Championship to the man who helped him get there.

“Not many people know Del’s been battling cancer, and this one’s for him. I love him,” Couch said in a shaky voice as he held up his trophy.

“I teared up,” Ballard says. “I cried about every third day from things people did for me or messages they sent me that I never expected, like Couch thanking me on TV. It puts me in a strange position because, you know, real men don’t cry, and there’s no crying in bowling. But my guys make me tear up sometimes.”