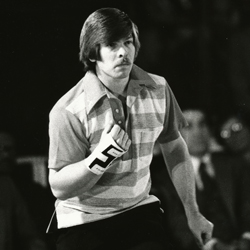 Wayne Webb could not have known it at the time, but the cot his parents put up for him at his hometown bowling center in 1973 after he survived a car wreck was an omen of the turbulent ride his life would soon become.

“I’d lie on the cot a lot,” Webb, who sustained a concussion in the wreck, told sportswriter Don Snyder years later. “When feeling some strength I’d get up and go help work the desk or maybe check the back ends of the lanes. The dizziness would come and go.”

A lot of things would come and go for Wayne Webb.

That spotlight he stepped into at age 23, dominating the tour in an era when dominance belonged to bowlers whose names are monuments now—Roth, Holman, Anthony.

The money he pocketed on those handsome paydays at the Showboat in Vegas, Riviera Lanes in Akron, Brunswick Northern Bowl in Chicago.

The confidence of a kid too young to know that the tournaments those houses hosted had names so legendary they inspired fear in lesser bowlers—the Firestone Tournament of Champions, the Showboat Invitational, the Brunswick World Open.

“Wayne was always aggressive with his bowling game in every single aspect,” says PBA Hall of Famer and former Player Services Director Larry Lichstein. “Nobody worked harder, nobody practiced more, nobody drilled more balls, nobody was more scientific with their equipment. Let’s put it this way: If every kid was as aggressive as he was, they’d have been Bowler of the Year by the time they were 23 too. He is no fluke.”

But back at Taunton Bowl in Massachusetts, where that cot awaited him as he worked the desk or tinkered with pinsetters between headaches, he was just a dreamy bowling alley rat with a house average of 209 at a time when that meant something.

For a kid in his mid-teens, it meant more than just “something”—it meant he might have a game he could take on the road. And that’s when he ended up the same way as so many other kids who think they have what it takes to hack it on the PBA Tour: broke and headed home with a decision to make.

“When Wayne Webb first set out for fame and fortune on the pro tour,” Jim Dressel wrote in 1981, “all he got were empty pockets, tired feet, sore fingers and some blunt advice from well-meaning friends. ‘Forget it, kid,’ they told him. ‘Go home. You’re in over your head.’”

Those “well-meaning friends” offered the same advice to countless other local hotshots who thought they would blast through the tour the way they blasted through league back home. Maybe most of them had more dreams than sense, but they at least knew enough to heed good advice when they heard it.

Wayne Webb was one of the few.

For PBA Hall of Famer Len Nicholson, the work of finding out if Wayne Webb could do it began the night he showed up for league at a place called Golden Pin Lanes in Tucson, Ariz., and it wouldn’t be easy.

“When he moved to Tucson he wanted to bowl the scratch league at the center I worked in at the time, Golden Pin Lanes,” Nicholson recalls. “The high series in the league was 650. Wayne shot 777 his first night bowling it. He was just a great bowler, head and shoulders above any league bowler.”

But “head and shoulders above any league bowler” doesn’t cut it, not when you’re battling for a buck against the greatest players in the world. Being the local house hero might have been nice for a night here and there, but it would take much more than that to appease a guy who packed more ambition in his 5-foot-5-inch frame than those “well-meaning friends” could see.

Webb hit the lanes while the rest of Tucson slept, logging dozens of games before dawn on the PBA patterns Nicholson had laid down on tour, devising the tricks he would take with him the next time he hit the road.

He let the ball dangle by his side the way Carmen Salvino did and felt his swing loosen like an unraveling knot. He learned to throw the ball as many different ways as possible while the voices of those who called him “One Shot Wayne” chided him somewhere in the back of his mind.

“I want to learn to throw the ball 10 different ways,” he told Dressel. “I’m always trying to find things that work better. The more you learn, the more there is to learn.”

And by the end of the 1980 season, he had learned to do one particular thing better than anyone else: Win. He more than doubled the previous season’s earnings with nearly $120,000, claimed three titles including the vaunted Firestone and the Showboat Invitational, and won Bowler of the Year seven years before Marshall Holman would.

Suddenly, his days as the kid who needed advice on tour were a distant memory. Now he was the guy who gave it.

But the story of what happened next is a story told by so many dreamers who found themselves as unprepared for success as they were for failure, overnight stars so blinded by their view from the top of the world they couldn’t imagine anything tearing them back down to the valley they started in.

“Wayne’s house was full of slot machines, pinball machines, pool tables,” Nicholson recalls. “He had everything, you name it, a full recreation center. He made $140,000 and spent $180,000. He was just a flamboyant guy.”

Chalk it up to flamboyance, chalk it up to some really bad accounting. Whatever the problem was for Wayne Webb, he owned 16 titles by age 28 and, by the time the 1980s came to a close, had little more than a claim in bankruptcy court to show for it.

The Wayne Webb whom Rypcinski caught up with was a down-on-his-luck guy who had lived the lives of several men by then, calling a different town home seemingly every year and never finding whatever he was looking for—Sacramento, Tucson, Indianapolis, Beaumont, Texas, Rehoboth, Mass.

Now he hardly had the money to make it from one tour stop to the next, and he talked like a man trying to plead with a past he couldn’t have back.

“If I could just get out of this hole I’m in, things would start rolling the way they’re supposed to,” he told Rypcinski. “If I’m ever fortunate enough that things come my way again, I won’t be stupid this time.”

But that’s the thing about fortune. It doesn’t always wait until you’re ready, and it hardly offers so much as a wave goodbye to those who waste it.

Webb would win a few more titles, his last coming in 1997 when Amletto Monacelli needed a mark to beat him for the Bud Light Championship title and instead left a 2-4-10 split he failed to convert.

It was a fitting way to win for a guy who, by that point in his career, had very little with which to hold his life together—maybe a little kite string here, a safety pin there. When he surfaced again in the PBA documentaryLeague of Ordinary Gentleman in 2003, he looked a lot like the kid who needed that cot put up for him back home, a legend fumbling around in the dark for glories that had long since passed him by. 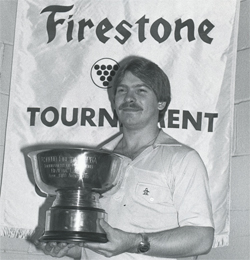 And if he felt any dizziness again, it was the dizziness left behind by squandered fortune now, the life that might have been.

But if the people who brought us League of Ordinary Gentlementhought they were filming some defeated has-been who had run out of comebacks, they forgot to mention that to PBA and USBC Hall of Famer Brian Voss, whom Webb defeated for his second straight Senior U.S. Open title in 2009.

Or all-time PBA titlist Walter Ray Williams, whom he beat last year to win the USBC Senior Masters. Or the other Hall of Famers who might have thought Webb’s days on the lanes were done—Johnny Petraglia at the 2008 Senior U.S. Open, Mark Williams at the 2010 Senior Columbus Open.

“If you’ve seen A League of Ordinary Gentlemen, you’re familiar with Wayne Webb, but probably not this Wayne Webb,” Jeff Goodger wrote after Webb edged Walter Ray in the 2010 Senior Player of the Year race.

Maybe not. Then again, anyone who suspects his recent knee surgery and new gig running a bowling center in Columbus, Ohio might be enough to sideline him for good does not know any of the Wayne Webbs we’ve seen over the years.