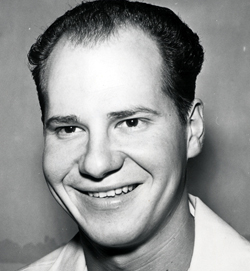 It is sometime in the early 1950s, where a young Billy Welu lifts his binoculars in the stands of the ABC Tournament, now the USBC Open Championships. He examines the games of the best players he can find, how the ball rolls off their hands, how the slightest turn of the wrist at the release creates a ball reaction he’s never seen before, the way they drive the ball through the pins with an authority he hopes to replicate.
Welu doesn’t know it yet, but the things he sees through his binoculars today are the lessons he’ll soon apply to the three eagles he will win with the famed Falstaffs team. He will win five eagles altogether, and he will become the second of just two bowlers to win the Masters back-to-back in 1964 and ’65. And that’s to say nothing of his victory at the 1959 All-Star, a tournament that would become known as the U.S. Open in 1971.

For now, though, Welu takes what he’s learned back home to Houston, where he will practice for as long as the place stays open—games he’ll buy with every piece of change he scrounges working paper routes and setting pins.

“Every cent went for more bowling,” he said years later in one Bowling Magazine story.

The fame he found soon thereafter sent him bowling so many games around the world in tournaments and exhibitions that he would tear a tendon in his arm. And, of course, Welu would continue bowling nonetheless. That’s how it is when nothing short of greatness will appease you.

“In this sport, where your livelihood depends strictly on how many pins you knock down, you can’t do yourself any good by sitting on the sidelines nursing injuries,” Welu said in 1956.

“When he was getting ready to bowl what was the ABC Tournament at that time, he would go in the stands and watch the bowlers bowling in front of us for two days,” remembers Welu’s former Falstaff teammate, Glenn Allison. “He would study the lanes to see how he wanted to play them and how he wanted to line up the team. He was the captain, and he would line up the whole team on the lanes.”

But those who knew Billy Welu during the brief time he spent in this world know that the man’s curiosity did not end when the bowling alley doors closed for the night. The Welu who never left home for a bowling tournament without his binoculars was the same Welu who wielded a book on trigonometry up and down the aisles of a flight from St. Louis to Paramus, N.J. with his Falstaff team, “asking questions about a new subject that caught his fancy.”

“He didn’t get many answers,” writer Ray Nelson joked in a story written shortly after Welu’s death at age 44 in 1974. “But that was Welu. When a subject appealed he wanted to know all about it and would go to libraries and bring home stacks of books. His mind was never content, never idle.”

Anyone who ever watched Billy Welu bowl a tournament knew it wasn’t just his mind that never knew contentment. It was also the ferocious competitive fire that raged within him, the appetite for greatness that sent him kneeling at the foul line “in an attitude of prayer,” as Bruce Plukhahn put it in 1956, and then punching the air after a key strike like a heavyweight fighter swinging to kill.

At 6’4” and at least 230 pounds, Welu may have earned a reputation as the gentle giant from Texas during the years he spent as the color man next to Chris Schenkel on early PBA telecasts, coining phrases like “hit ‘em thin and watch ‘em spin” or “trust is a must or your game is a bust.” But to confront the man on the lanes was to confront a caged lion.

“As long as I’m in bowling, which I love more than anything else, I want to be at the top,” Welu said in 1963. “I want to bowl well enough and long enough to make the Hall of Fame. I’d like to be one of the youngest players to enter the Hall.”

Welu wanted to be the best in the world, and he didn’t mind saying it, either. He also didn’t mind looking flashy along the way, sporting a pair of purple and chartreuse pants at the Masters one year.

“He bowled rather well, so a lot of people got to see his garb,” Nelson wrote. “No one asked for his tailor’s name, but he enjoyed this flight away from the norm.”

Yes, you might say Welu “bowled rather well” in his day, well enough to be hurried into that Hall of Fame he dreamed of joining by a landslide vote the year after his death. Some say the four rejections that preceded his election to the Hall broke Welu’s heart, and given the man’s singular and absorbing focus on that one goal in his life, who is to say it didn’t?

But if it’s true that Billy Welu died with a broken heart, it is just as true that if he were around today, even he might consider this one fact an even greater accomplishment than that landslide vote into the Hall: To this day, only one other bowler has successfully defended a Masters title—Dick Hoover in 1956 and ’57.

Since Welu won his second consecutive Masters in 1965, America has elected nine presidents, sent men to the moon and back six times, and watched many great champions come and go in the sport of bowling—Dick Weber, Earl Anthony, Mark Roth, Marshall Holman. Not one of them, though, can lay claim to Billy Welu’s Masters record. In fact, for all the great things they did in their careers, Weber, Roth and Holman never won the Masters even once.

“He was into the majors—the Masters, the All-Star, the World Invitational,” Allison says. “He would always get really pumped up when it was time to bowl those events, and his record shows it.”